The father of the piano is Paolo Fazioli. He graduated from the University of Rome as a technical engineer and received a degree as a pianist at the Conservatory of Pesaro. His family had gained reputation in the furniture industry; Fazioli himself, started to work in the company, gaining management experience. It was here where he decided to combine these three directions to create a great instrument. Paolo Fazioli had experimented with several brands; however, none had the sound he was looking for. Encouraged by his family, he began working in his musical instrument workshop in the family factory in the town of Sacile, 60 km northeast Venice. This was a place close to Val di Fiemme, where spruce trees grow. Stradivari and other violin makers used the spruce, because of their slow growth and its thick, almost dense tree-rings to make the sound box, the heart of every instrument. 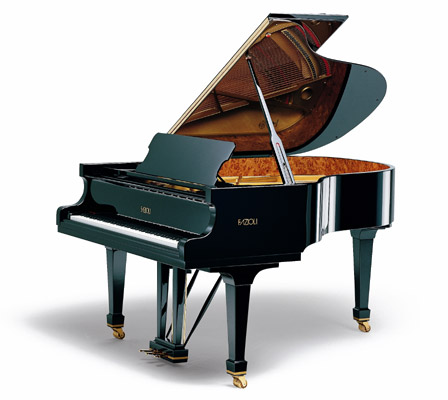 The history of the Fazioli piano is a special one, as it is the only piano in the world where each and every component is hand-made. Pianists and piano-makers had always respected traditions dearly and therefore it was almost impossible to enter the market with a new brand, yet Fazioli succceded in doing do so. Legend about his piano had it that it was the perfect instrument and could not be further improved; all such efforts were in vain. Paolo Fazioli though to himself that maybe the piano could be improved and maybe an even better instrument could be created. He wanted to create an improved piano by preserving traditions and and by making use of the knowledge and expertise accumulated during three-hundred years of piano making.

At the end of the 1970s he started planning and at the beginning of the 1980s he already completed his new piano model. His first four pianos were exhibited at the Frankfurt Music Instrument Fair in 1981. In the past 25 years, Fazioli has become an accepted and well-known brand. Already the first pieces became competitors of the so far world famous piano brands. Many say that the Fazioli has surpassed them all. None of his pianos can leave the factory without Fazioli’s approval. He is the one to test each and every one of them in person to grant the proper quality.

The secret of his success is an unlimited amount of accuracy and a precision to the tiniest detail, starting form the selection of materials to designing, constructing, assembling and finishing with a perfect tuning. Each and every instrument coming form the workshop is unique; however, all share the feature of being triumphant in every concert hall all over the world, year after year.

The Diapason, the famous French trade journal has recently tested nine concert pianos and the FAZIOLI has received top scores in almost all tested categories, surprisingly surpassing market leaderss, such as Steinway, Bösendorfer and Yamaha. Several world-famous artists share the view of French critics; therefore, it is not surprising that this instrument has been hailed as the Stradivari of pianos.

Fazioli pianos have, since their coming to life, become the favourite musical instruments of several famous pianists all over the world. For example: Lazar Berman, Alfred Brendel, Vladimir Askhenazy, Elizabeth Leonskaya, Nikita Magaloff, Aldo Ciccolini, and to name a few Hungarian artists: Annie Fischer, Dezs? Ránki, Gergely Bogányi, or Tamás Vásáry..
The Hungarian Instrument Makers’ Association awarded Mr. Paolo Fazioli with the title of “Master with a Golden Diploma” in the Knights Hall of the Academy of Music “ in 1999.

Hungary can boast of the first festival organised for the Fazioli piano. The FAZIOLI Piano Festival came to life 1998 following the initiative of pianist Szilvia Kárászy. She is the founder and director of thefestival which has been organised as a co-event of the Budapest Spring Festival since 2001 and has become a traditional event since then. Szombathely has become a new location for the Festival in 2004, the town of Vác joined one year after.